This was detected when I plugged it in. Running lsusb gave me the following output:

Then I tried the example described here: http://silicondelight.com/2012/07/grabbing-frames-from-webcam-with-a-raspberry-pi/

However, I kept getting errors relating to the v4l2 libraries.

I tried a powered hub – a Logik Hub from Currys snipped as described here – http://www.raspberrypi.org/phpBB3/viewtopic.php?f=28&t=8926 . The Hub works but the webcam still didn’t.

I tried two different commands for taking stills: uvccapture and mplayer. Uvccapture showed the most promise. Some sample commands can be found here. However, still no luck with the Logitech.

I then cheated. I swapped the Logitech for a Microsoft branded webcam I also had floating around.

This produced results with uvccapture – but only with the options ‘-v -m’:

This took a picture and saved it as snap.jpg.I also found a way to take multiple snapshots with different filenames:

– this took a snap every 5 seconds or so.

I then played around with Contrast (-C), Brightness (-B) and Saturation (-S). A good combination was contrast and brightness high (e.g. 255) and saturation low (e.g. 1) to give me: 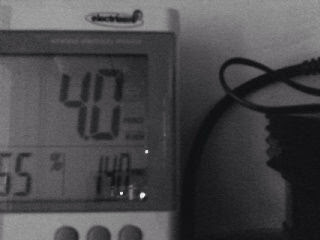 Not ideal but a good starting point.

One problem is the Pi is in a cupboard. With the door shut some illumination is needed. This generates it’s own problems: 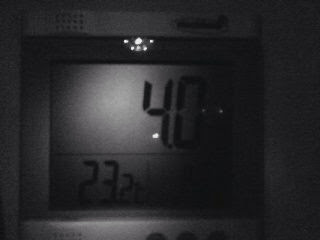 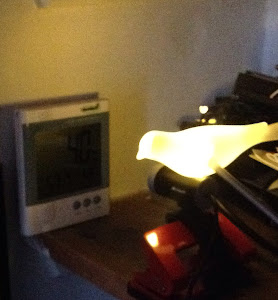