Mammalian brains are horrendously complex. But there are some general patterns of organisation. If we consider a systems-level abstraction, can we learn anything about how we think?

The first remarkable thing about your brain is that it is made up of blobs and sheets.

From popular images, we tend to think of the brain as a lump of spherical jelly perched upon a spinal stalk. 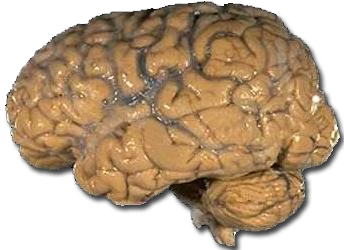 But the wrinkly bit of the brain – the neocortex – is actually a thin two-dimensional sheet of roughly common construction that is twisted and folded to fit in our skulls. Below the sheet are a number of blobs that provide interfaces to the inputs and outputs of the body.

For me, the big sheet is the most interesting. It’s the first thing you see in a human brain. It is actually two sheets connected by a bundle of fibres. You is actually two. Each sheet is about the size of a tea-towel when unfolded. It is as thick as a birthday card (1-3mm).

When you unfold one of these sheets the brain makes a little more sense. There are different areas of the sheet that receive different signals. Vision goes in at the rear (occipital lobe), sound into the bottom middle (temporal lobe), and touch into the top middle (parietal lobe). Touch sits next to an area for motor output (found on the edge of the frontal and parietal lobes). Each area is continuously connected to others, yet is constrained by the geometry of the sheet. In the image above, the sheet is also surrounded by “limbic inputs” – these are the interoceptive sensations that form the basis for our emotions and feelings. Everything is duplicated on each side of the body – there are left and right sheets that are roughly the same.

An amazing fact about the neocortex is that it appears to apply a common information processing function. Why do I say this?

It is important to note here that the common processing algorithm of the cortex does not “explain” the whole of human thought. The neocortex is one part of a complex system where each of the parts is needed to function properly. There are a few patients that are missing large portions of cortex or one hemisphere that still appear to be able to function (albeit with learning difficulties). It is the sheets and blobs that make our brains work.

When looking at the sheet, you get a better intuitive understanding of what different areas may be doing at an information processing level. This may be informed by a knowledge of evolution and by comparing the brains of different mammals.

The most notable part of the sheet in humans is the large expanse at the front of the sheet: referred to variously as the frontal cortex, the pre-frontal cortex and the frontal lobes. It takes up around a third of the space on the sheet. Its positioning informs us about its function: it grows frontward from the motor output areas. Functionally it is a motor planning area. It is much smaller in other mammals, suggesting they live more in the moment. In humans it has been co-opted for language, art, spreadsheets and military planning.

People often think that the frontal lobes have some magical quality that makes us “us”. But this doesn’t seem to stick with the evidence for a common algorithm set out above. It would seem that the frontal lobes are just neocortex like the rest of the sheet. While there are differences in density of connections, it does not appear to be a special different type of sheet, just the plain old sheet from other areas but connected in a particular way to take on its function. This is important, if we can work out what the visual cortex or auditory cortex are doing, we can have an insight into how our brains may be performing more abstract processing.

The hippocampus has nothing really to do with seahorses and everything to do with memory. It makes our long term memories. It is often referred to as if it was a blob, but it’s actually really a part of the sheet. In fact, it’s a curled edge of the sheet that is folded in on itself. “Memory Crust” would be a better name.

The sheet of the hippocampus is fascinating for a number of reasons. First, it may be the prototype for the sheet; the neocortex is possibly a mutated copy of a portion of the brain similar to the hippocampus and surrounding interface cortex (the entorhinal cortex). The entorhinal cortex has three layers, while the neocortex has six, suggesting the neocortex is a neural calzone. Second, it joins the associative (i.e. multisensory) processing performed in the temporal lobe to the planning performed by the frontal lobe. You can survive without a hippocampus; you just can’t make any new memories. Third, it seems to be originally designed to aid navigation in space and time. Those memory palaces of mnemonists actually give away how we remember. If we can understand how smaller mammals navigate, we can understand our more complex and abstract thought processes.

Considering a chunk of ourselves as a two-dimensional sheet lends itself to geometrical explanations of thought. We can ignore the complexity and excess of a third dimension. We can also begin to sketch, in two-dimensions, some general organisational patterns. Abstracting and generalising the detail above, we can get something like this for a hemisphere:

Of course, this abstracts nearly all of the actual complexity. Whether we leave anything useful is an open question. But if building a brain is more like gardening than engineering, then the above can be thought of as a planting plan.

Thinking of the sheet as a doughnut has benefits. Thinking then becomes the flow of information around the doughnut:

This is only part of the picture though. The information flow relies on the blobs that provide the underlying interconnect.

A lot of the essential plumbing of the brain is performed by the blobs. These are connected to the cortical sheet. These are dedicated processing centres that receiving a large number of incoming connections, do something clever, then project the result back out to the cortical sheet or other blobs. Turns out that a cortical sheet isn’t necessary for complex neural processing – birds don’t have a neocortex but instead just have a hell of a lotta blobs. Insects and lizards are also mostly all blobs.

In the human brain, three core blobs are: the thalamus, the basal ganglia and the cerebellum. These are actually old bits of a more primitive cortex-less brain that have been repurposed following the explosion of our greedy neocortex.

The thalamus is a gatekeeper and switch for incoming sensory signals, and processed signals from the neocortex. You can think of it in an “input processing” category. When it begins to malfunction, we fall unconscious and generally die.

The basal ganglia is a gatekeeper and switch for outgoing motor control signals. It helps makes sense of the fuzzy chaos of the neocortex to choose one consistent set of action plans that become what you do. When it begins to malfunction, we get Parkinson’s. In insects, the basal ganglia, rather than the neocortex controls motor output.

The cerebellum is a little mini-brain that sits at the back of the neocortex. It is connected to most things. It can be thought of as a pattern memory. It stores mappings between different sets of input and output signals. It can be thought of as implementing a form of supervised learning similar to most modern neural networks. Apparently you can live without a cerebellum.

Blobs in the Sheet

Putting the thalamus and the basal ganglia into our models, we have something a bit like the following:

A lot of neuroscience is horribly complex. It is near impossible to copy a human brain. However, a lot of this complexity is grown and learnt – underlying it are simpler rules of organisation. If we want to construct artificially intelligent agents (or provide some form of human intelligence mimicry), we can maybe use the simpler of rules of organisation to grow the complexity. This post sets out where we can start.